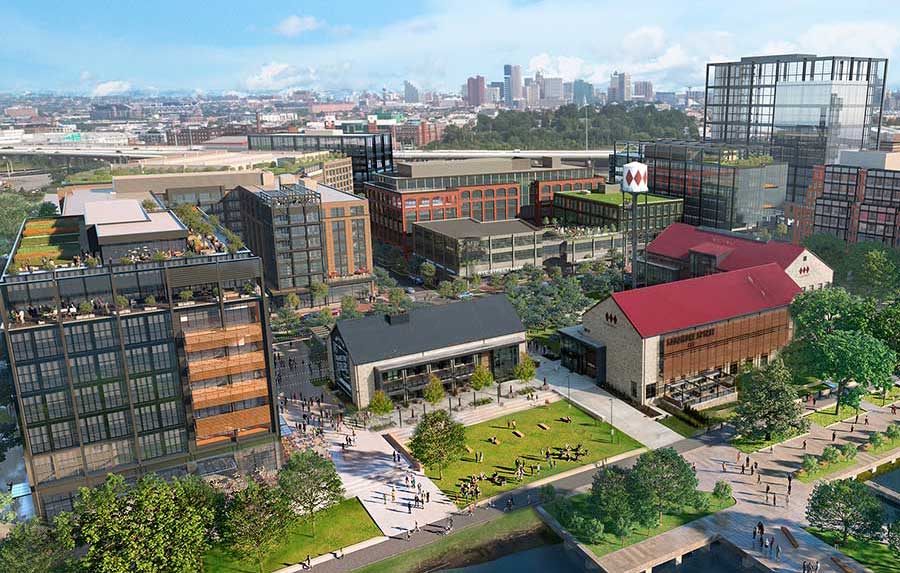 To the north runs Interstate 95, to the south is the Middle Branch of the Patapsco River, and right in between, on 235 acres of formerly industrial land in South Baltimore, are the beginnings of Port Covington. The 14-million-square-foot, mixed-use development sits adjacent to the waterfront headquarters of Under Armour, and that’s no coincidence. Under Armour CEO Kevin Plank’s Sagamore Ventures is the lead investor on the megaproject, which is part of Maryland native Plank’s ongoing investment in revitalizing Baltimore.

Weller Development Partners has been leading development on phase one—aka “Chapter 1B”—of Port Covington; recently, Weller was joined by MAG Partners, a woman-owned firm, and MacFarlane Partners, a Black-owned firm, who will handle leasing for Chapter 1B as well as development for the rest of the site. MAG’s and MacFarlane’s involvement is another non-coincidence—Port Covington is committed to representing and engaging the full diversity of South Baltimore, including among suppliers, contractors and, yes, the development team. “We’re not just building a new community or a new section of Baltimore,” says Adam Genn, co-lead of development for MAG Partners. “We’re creating a new place.” 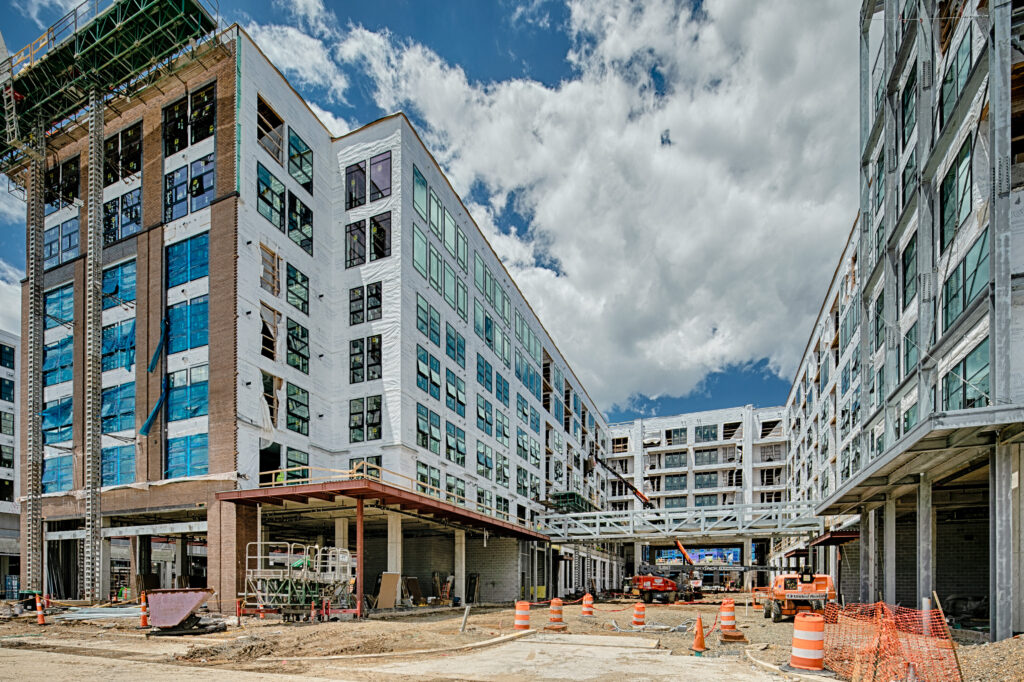 There’s “big,” and then there’s “we need our own zoning” big. “We actually have our own zones within the Baltimore city zoning ordinances,” Genn says. “The PC [planned community] zones allow for the predominance of the site to have unlimited height and density and a robust mix of uses that enable us to both sell and develop parcels in accordance with what we’re hearing from the market.”

When Port Covington is fully built out, in what developers estimate will be 15 to 20 years, it will cover 45 square blocks, with millions of square feet of office, residential and retail space, plus more than 50 acres of public green space. For now, there’s “just” $700-million Chapter 1B going up—1.1 million square feet across five buildings, along with underground utilities, 10 acres of green space and 1.4 miles of new roads. Construction has involved more than 1.1 million work hours and 850 workers onsite; 140,000 cubic yards of dirt, procured from the Baltimore Department of Public Works, which excavated the dirt in the process of installing two underground aquifers for the city’s drinking-water system; and nearly 3,000 piles. “Some of the piles go up to 75 feet deep,” says Greg Hermandorfer, vice president of construction for Weller. “That’s a good sense of how much work had to be done before we could even really go vertical.” 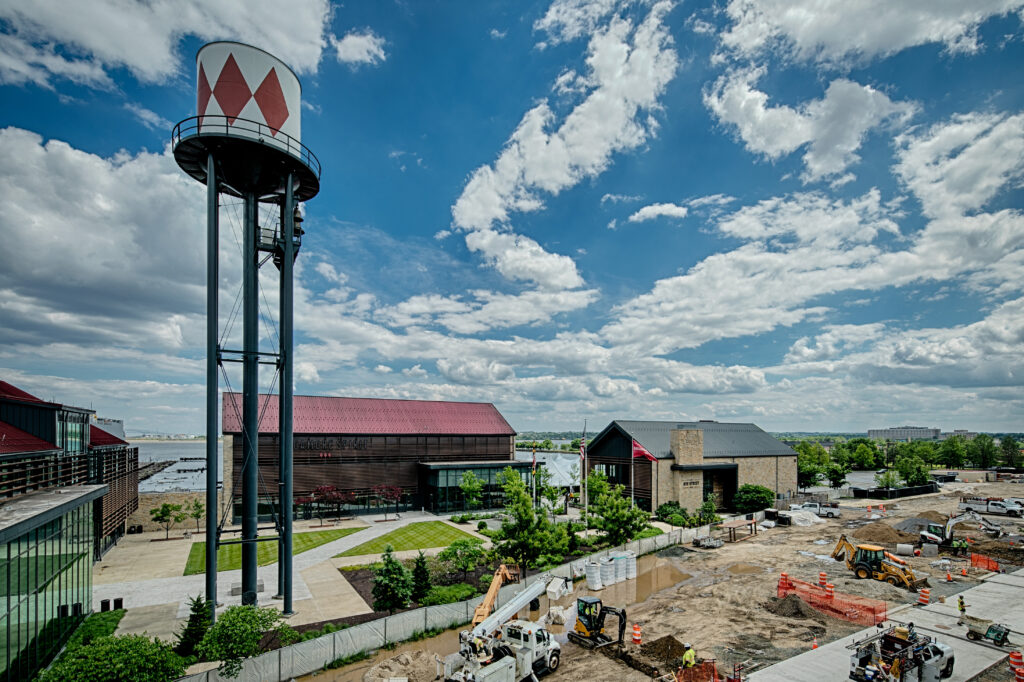 Chapter 1B alone involves four different general contractors—Whiting-Turner, Clark Construction, CBG Building Company and Bozzuto Construction Company—some of them direct competitors, all of them working simultaneously and literally side by side on five substantial buildings. To keep tabs on them and everything else about the projects, the developers have relied on a mix of third-party construction managers, browser-accessible technology platforms and old-fashioned elbow-rubbing. For that last piece, they converted an old boat-repair shop on the site into an office for the general contractors and the Weller team. “So, everybody’s gotta play nice in the sandbox, but you’re also always walking back to this space and crossing paths with people,” Hermandorfer says. “We did that by design, so that there’s more interaction.”

They also conduct weekly check-in meetings with all the general contractors, plus quarterly reviews with each company individually to monitor group dynamics. “We’ve got a one-page scorecard that everybody fills out, and we sit down at lunch and just hash it out,” Hermandorfer says. “Get all the issues off your chest right then and there, so you can keep moving and you’re not waiting until the end to resolve problems.” He adds: “It’s communication. That’s obvious—always a big one.”

For Genn, the main challenge of a megaproject like Port Covington is more fundamental. “Creating something from nothing is really difficult,” he says. “Getting all the entitlements to do that, and then to build all the roads and infrastructure at the same time that these five buildings are going up, is an enormous effort that speaks to the quality of the execution team here.”

While the pandemic itself didn’t affect Port Covington all that directly—Chapter 1B didn’t break ground until February 2021—its aftereffects have, including materials shortages and supply-chain problems. Wood prices shot up at the start of the project, leading the team to consider OSB board, for example, while one of the buildings saw its windows held up. In both cases, general contractors, architects, materials consultants and developers reacted quickly and collaboratively. “We went through all kinds of different options for new solutions,” Hermandorfer says. “That was to everybody’s credit. Everybody did a great job.” 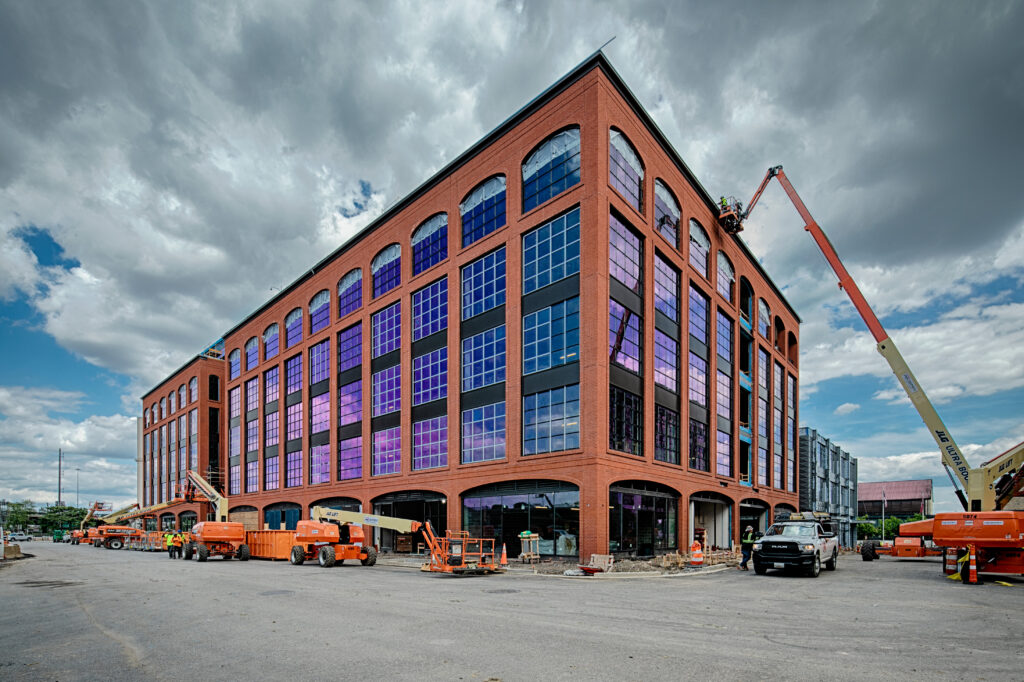 Chapter 1B isn’t scheduled to wrap until next spring or summer, but Port Covington is already busy making itself a part of South Baltimore. The developers have signed a memo of understanding with the City of Baltimore and a community benefits agreement with six area neighborhoods guaranteeing that affordable housing, local hiring and job training, supplier diversity, grant money and other initiatives will be part of the megaproject.

“A lot of us feel like all of our prior careers have led to this moment,” says Genn, a Baltimore native, who as a member of Port Covington’s development team serves on the board of the recently created South Baltimore 7 Coalition along with representatives from the six neighborhoods. “At the end of the day, it’s deeply rewarding because we’re creating places for people to live, to enjoy and to try and impact the trajectory of people’s lives. If that’s what we’ve accomplished, then we’ve been successful.”

Adds Hermandorfer: “Just the idea of getting to transform and build a mini city and have this big of an impact on Baltimore—I love it.”